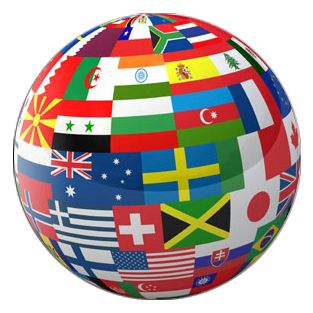 Today’s headlines are filled with international stories about nuclear proliferation, climate change accords, free-trade agreements and other global issues. Embedded in these reports are frequent references to, the international community. For example, a recent headline claimed that in his speech to the UN General Assembly, U.S. President Donald Trump praised the international community for voting for sanctions against North Korea.  Trump did praise UN members for voting for sanctions but he never uttered the term, international community.  Still, the term is used regularly by journalists, scholars, politicians and many others begging the question, what does it really mean? Mor Mitrani, a Post Doctorate Fellow in the Berlin-Jerusalem Joint Post-Doctoral Program recently published a working paper that asked: Who is the International Community? To help answer the question she used automated content analysis and topic modeling.

The working paper is titled, The Discursive Construction of the International Community: Evidence From the United Nations General Assembly.  In the paper, Dr. Mitrani suggests that by, “exploring the ways in which states communicate and talk about the international community, we can learn who it is, what its main building blocks are, and what role it plays in world politics.” In her analysis, she uses the text mining software WordStat to perform an automated text analysis of 4,264 speeches delivered at the annual general debate of the United Nations General Assembly. The speeches were given by member countries from 1992-to-2014.

In describing her method Dr. Mitrani writes, “The empirical research is designed to assess the frequency and density of the concept “international community” and map the contexts and topics that are associated with it.” As part of her analysis, she used the software WordStat to filter from the 4,264 speeches, all references to the phrase, international community. This produced a subset of 15,122 sentences (cases) for analysis. From this analysis, Dr. Mitrani was able to determine the extent to which member states used the term international community in speeches and the frequency. She also explored the context in which it was used by specific states such as the United States. 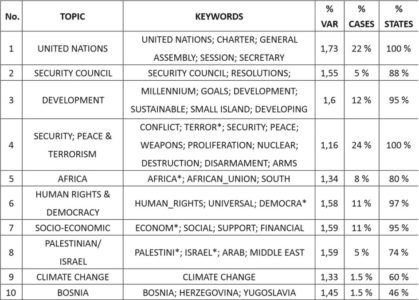 Note: The table presents ten most common topics in international community references based on keywords analysis by case appearances and states’ usage (n=15,122; 1992-2014).

From this table, the author divided the topics into three subgroups which she analyzed separately. She illustrated her analysis with specific references from speeches related to the different topics.

In the discussion, the author writes, “this project offers three contributions to the scholarly field. Theoretically, it develops a discursive epistemology as an analytical framework to the concept of international community. Methodologically, it utilizes methods of computerized content analysis that enable (one) to explore “international relations” in their most literal manifestation through the ways states talk among themselves about the world they aim to govern. Empirically, it proposes an additional prism to construe the array of common legitimate rules of conduct that constitute the international community, as well as dynamics of these rules since the end of the Cold War until today.”

You can access Dr. Mitrani’s complete paper here The Discursive Construction of the International Community