The media and the Democrats have never been popular with Fox News which many would argue is a large part of its appeal. Even with a global pandemic threatening the country not much has changed.

Of course, this is something the mainstream media writes about and comments on with regularity. Lee Moran from Huffington Post writes, “Sean Hannity Uses Deadly Coronavirus Outbreak To Spew Hate At Democrats, Media,” Oliver Darcy of CNN Business writes, “Fox News hosts accuse Democrats and journalists of ‘weaponizing’ coronavirus to attack Trump,” Courtney Hagle from Media Matters writes, “Fox News handles coronavirus by pivoting to what it knows: Attacking Democrats and the media.”

Now we know, in this polarized world, many people, will see these articles as biased and coming from fake news, drive-by-media or one of the many other labels commentators and the public place on Fox news critics. We tried to take an objective look at this issue by using qualitative analysis software QDA Miner and text mining software WordStat to analyze COVID 19 coverage of Fox News and compare it to several major networks. Here is a brief overview of the method we used.

Using LexisNexis, we harvested news broadcast transcripts from five major American TV networks (CNN, Fox, MSNBC, ABC, NBC) from January 1, 2020 to March 14, 2020. We limited our analysis to paragraphs within these transcripts that included the words ‘coronavirus’ or ‘Covid19’, a task facilitated by QDA Miner’s text retrieval and annotation tools. Importing into Wordstat allows for the extraction of most common phrases and most frequent words, along with their distribution across time or networks. We also employed correspondence analysis and the deviation table feature of WordStat to compare and contrast words and phrases from the different networks. We also used the key-word-in-context feature to ensure we were getting the right meaning of a word or phrase within an interview or report. But first, we extracted the 300 most frequent words, after removing names of media anchors, journalists, commentators and guests, as well as words that were part of the show’s name (e.g. “news”, “morning”, “evening”). A correspondence analysis was then performed to identify words specific to different media. The plot of the first and third axes (see Figure 1) clearly shows that among all those words, “media”, “democrats”, “democratic” characterized more than any other words the treatment of the coronavirus by Fox News. Biden and Sanders names are also associated more often with references to the coronavirus, yet part of it may be explained by the coverage of these Democrat candidates position on this issue and the Democratic primary race. The word “Chinese” also seems to be specific to Fox news. We will see why a little bit later. 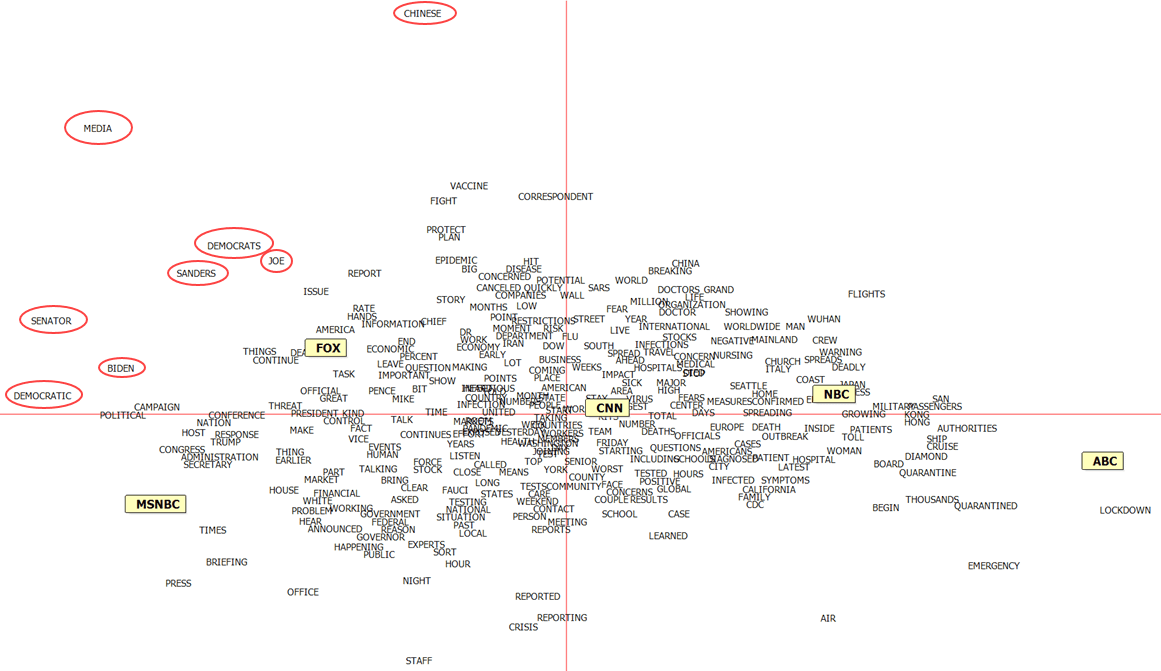 We then created a deviation table to identify the 15 words that are the most and the least characteristic of the coverage of coronavirus by those same media (see table 1). This table confirms the frequent references to media and to democrats in the coverage of the coronavirus by Fox News. The words “Chinese” and “China” also show up as characteristic to Fox News. It is also worth mentioning that the table also clearly shows that MSNBC coverage of this topic focused on Donald Trump’s administration response to the virus.

Table 1. Deviation table of the 15 most and least characteristic words associated with references to coronavirus by network

Figure 2 and Figure 3 show how often the words “democrat” and “media” are mentioned in paragraphs about COVID 19. We used term’s rate per 10,000 words rather than raw frequencies to compensate for difference in the number of news from different sources. These graphics shows the word “media” is two-to-three times more likely to be mentioned on Fox in connection with the Coronavirus, while the word “Democrats” is at least twice as likely.

Figure 2. Use of the word “democrat” with coronavirus by network (rate per 10,000 words) 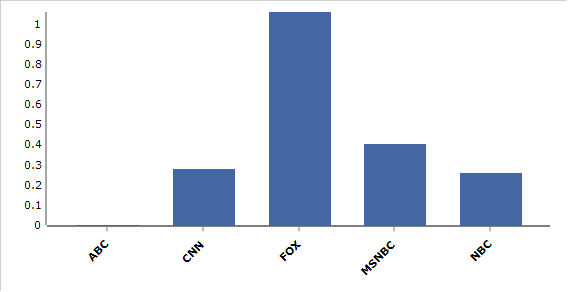 Figure 3 Use of the word “media” with the word coronavirus by network (rate per 10,000 words) 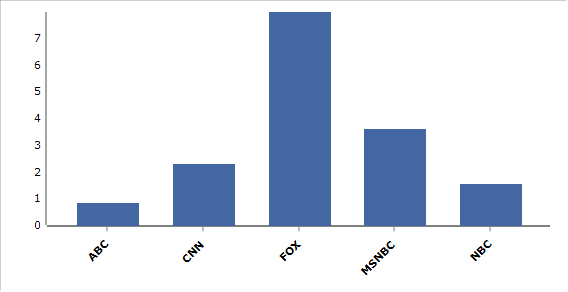 When we look at the instances where those words appear we note that in January and February, Fox News network, and many of its hosts, blamed the media and the Democrats (often allegedly seen to be working together) for creating panic or exaggerating the threat of the coronavirus.

“All right, so the media mob, Democrats are weaponizing, politicizing the coronavirus outbreak. But will it come back to bite them?”

“President Trump firing back at Democrats in the media for trying to stoke this mass panic over the coronavirus.”

Fox often drew comparisons with the Flu virus and death rates creating the impression or obfuscating which was more dangerous.

For the record, the flu kills about .01 of people infected. Coronavirus statistics vary to date and death rate maybe up to 3% but even at 1% it would be ten times more deadly than the flu.

Also, a term used almost exclusively by Fox then and now is “Chinese Coronavirus” (see Figure 4). Journalists from the New York Times and CNN, among others, criticized President Trump in the last few days for the use of this term. It appears this specific way of referencing the coronavirus comes from the Fox News coverage. The first use of this term by Fox News appears on January 22nd and was used constantly over time since then. To be fair, CNN often referred to the Wuhan Coronavirus. They made use of this term 146 times, essentially between January 20 and February 12, when a vast majority of the infected cases were in the Wuhan region. It was mentioned only once since then on March 11 by Chris Cuomo with quotes, to criticize Trump and Republicans, and more specifically Kevin McCarthy’s characterization of the virus as “foreign”. 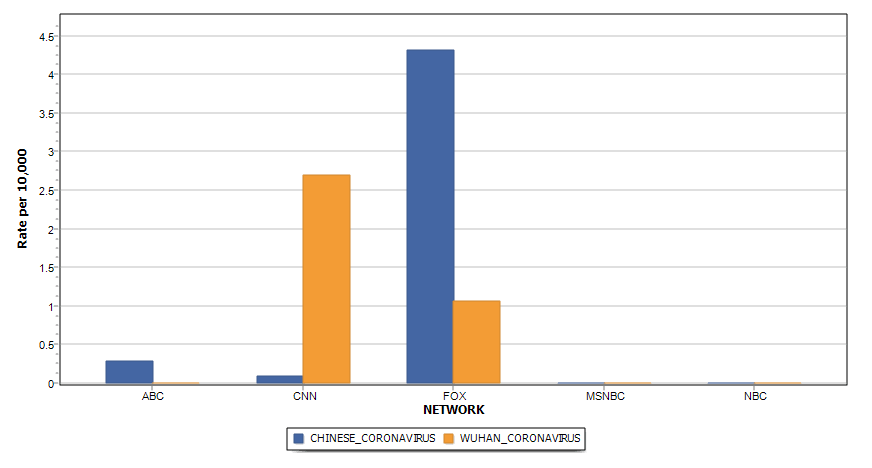 The Fox news commentary started to change in the last two weeks. The tone at Fox and the gravity with which it took the virus became markedly different. Of course, the “media mob,” mainstream media, their partners and the Democrats, are still the enemy. But if you listen to Fox, the media and the Democrats have changed their tactics from creating panic to working to “bludgeon” the President and “politicizing” the situation (see Figure 5):

“not only the Democrats trying to use the coronavirus against President Trump. The mainstream media is digging in.You won’t believe what they have said in the past 24 hours.”

“Up next, Democrats and the media bash President Trump’s Oval Office address on the Coronavirus.”

“the media and the Democrats’ activities over the last few weeks have been absolutely grotesque, disgusting, and horrendous.”

“the mob and the media, Democrats, what do they do? They want to use a deadly virus as a political weapon against the President, seemingly rooting for this to be, quote, “Trump’s Katrina.”

Figure 5. Use of “Media Mob” and “Politicizing” idioms by Fox News over time 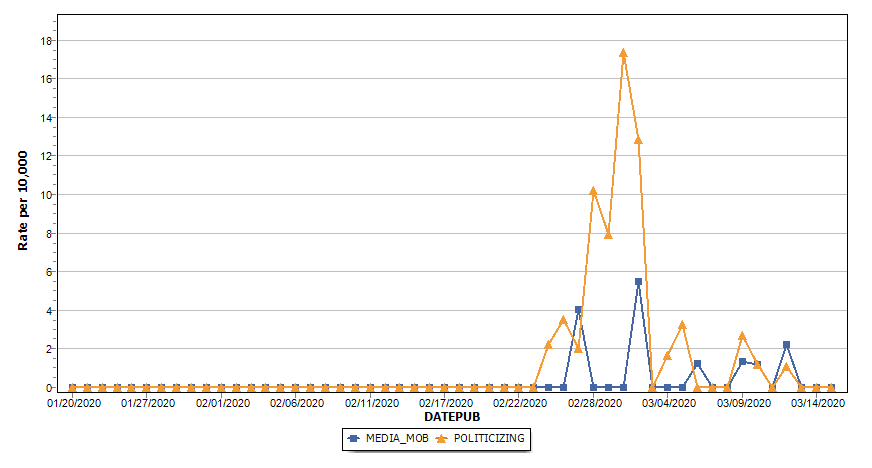 As recently as March 16, President Trump said the situation might last into July or August. The situation is changing every day, but on Fox at least, the usual targets remain the same. This is clearly not something that has escaped the mainstream media and from our analysis they have a point.