How is the media covering the death of George Floyd and the resulting protests? While we are still in the midst of the protests which are continuing across the U.S. and around the world we thought it would be of interest to examine how several media organizations are covering the event and how they compare with one another. We have chosen eight media organizations that, in general, encompass the political spectrum in the U.S. from Fox News and the Wall Street Journal at one end, to CNN and The New York Times at the other.

With the help of Factiva, we captured all articles mentioning George Floyd up through Tuesday morning, June 2, from eight media organizations. Table 1. Since many of the transcripts involved other subjects such as Covid 19, we extracted paragraphs with the name Floyd to concentrate on words associated with Floyd.  A total of 6362 paragraphs were extracted and analysed using the content analysis software WordStat. 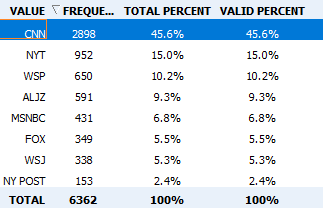 In past analysis of coverage of events such as the COVID 19 outbreak in the U.S. we saw significant differences in the use of language, the emphasis of different political agendas and attitude toward the media between different media such as Fox News and CNN, ABC, MSNBC and ABC.  While the differences here are not in as stark a contrast as our previous analysis, there are still interesting differences that are worth exploring that reveal different political allegiances.  The nature of George Floyd’s death (captured on video) and the general, universal condemnation by politicians, the general public and other well-know public figures including entertainment and sports celebrities resulted, initially, in similar reporting across the board. However, as the story developed, and large demonstrations ensued, the political agendas seem to become part of the framing of the coverage at both ends of the spectrum.

While all the media we selected witnessed the same events, the choice of words they use to refer to these events are often revealing. What some may see or describe a peaceful protest, others may see anarchy or chaos. We created two categories with words such as “protest” “manifestation” “march” on one side, and “riot” “looting” “chaos” and “anarchy” on the other side. Looking at how the various media organizations characterize the events related to George Floyd’s death (Figure 1) we see that they primarily talk about protest vs riots.  All media use protest more frequently but some by a lesser margin. This is most likely due to the fact there were far more peaceful protests than violent events. Al Jazeera rarely uses riot. This may be explained, in part, because as an international network it takes a more national view of the story and uses demonstrations and protest to explain what is happening nation-wide when riots are more localized to certain cities. However, Fox news is almost twice as likely to use the term riot than most of the other media and less likely to use protest. This is probably not surprising given the network’s support of the President and more conservative “law and order” voices in the country. 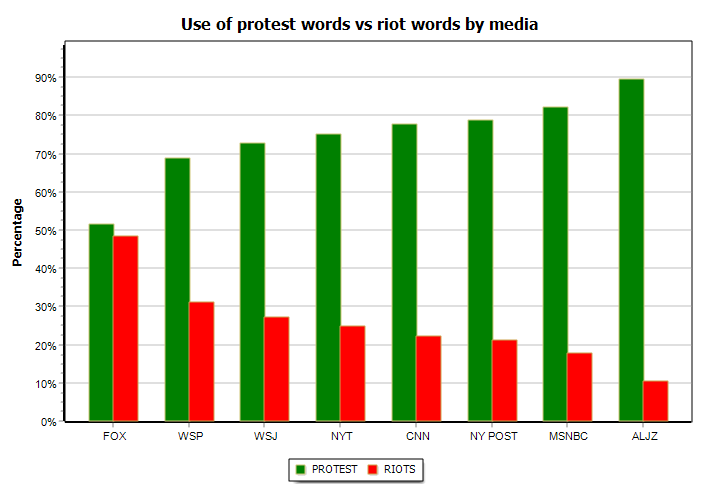 Only Fox News questions the expression or use of that anger and outrage.

“Violence erupting tonight in cities across the country. We see anger, some righteous, but a lot of it right now is frankly riotous and out-of-control.”

“All people of good faith agree that what happened to George Floyd was heinous and depraved. It was murder. But that’s not what we’re seeing on our violent streets. We’re not seeing outrage really expressed about that.”

“Obama’s administration, and they didn’t have this degree of outrage.”

“Now, I think the nation is paying attention. They’re watching this closely. They’re disgusted by Floyd’s killing and thank the good lord that they are. And they’re disgusted by those who seek to use that pain as a pretext to push an agenda where there is antifa or just random anarchists or people who just want to cause trouble. Violence against innocent persons or property.” 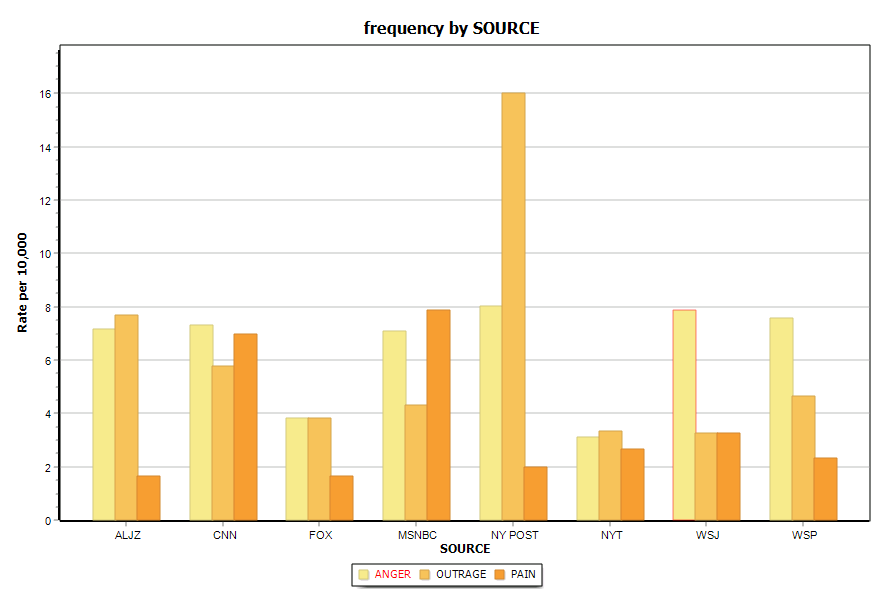 There is also a disparity in the frequency with which some of the media organizations use words or phrases in two of the categories in our dictionary directly related to Floyd’s death and the subsequent protests, racial elements and police brutality. (Figure 3 and 4) The racial category includes words such as: black, African America, race, racism, segregation, white, brown etc. The police brutality category includes words and phrases related to this issue: brutality, police brutality, police violence, excessive force etc. In both cases Fox News is at the low end of the chart, minimizing the racial element of this incident, while Al Jazeera and the Washington Post are at the top end. 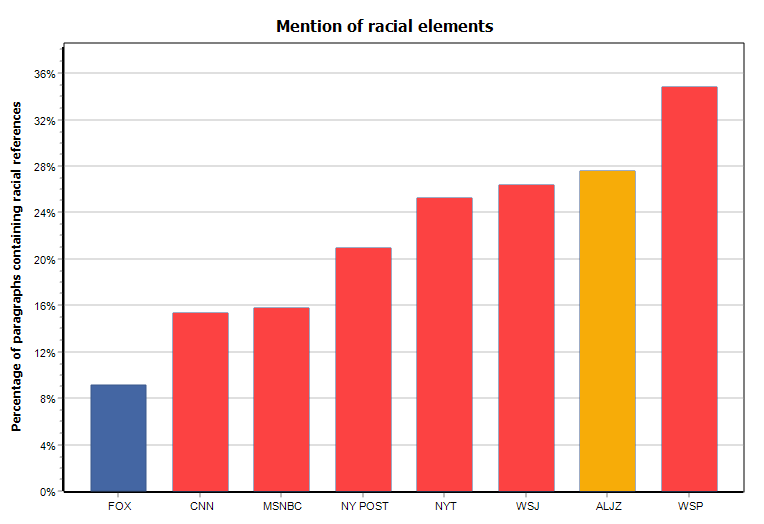 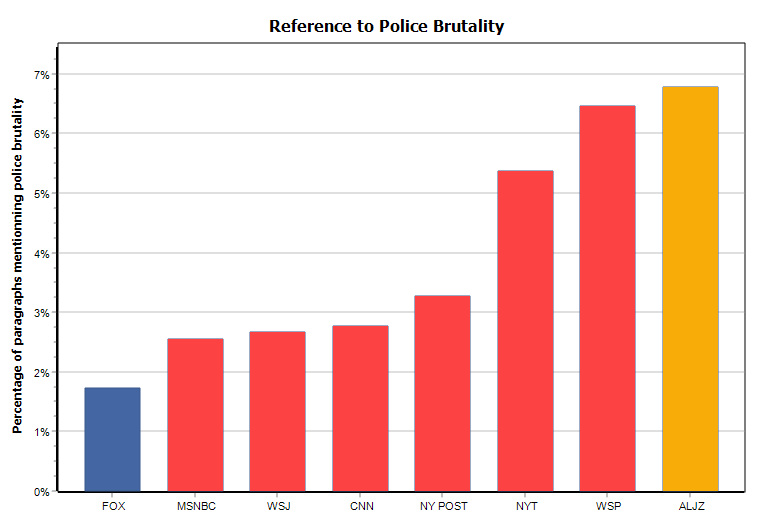 Finally, there is the issue of President Trump, and how he is portrayed by the different media organizations. Figure 5 shows the frequency President Trump is mentioned but by looking at the keyword- in-context you see he is treated quite differently. We take probably the two most extreme examples, Fox and CNN. CNN is frequently extremely critical and confrontational, whereas Fox is far less critical even though it mentions the President or his actions more often.

“The DC mayor said while Trump “”hides behind his fence afraid/alone,”

“President Donald Trump spoke the words of a tyrant Monday”

“Trump has been told he should more forcefully denounce those spray painting buildings, looting Targets and setting cities on fire — and that he hasn’t done so nearly enough.”

“Mr. President, it is helpful when you lead with compassion. And the tweets that I saw yesterday were far better.”_

“We had nine, nearly 10 very eloquent minutes from the President of the United States” 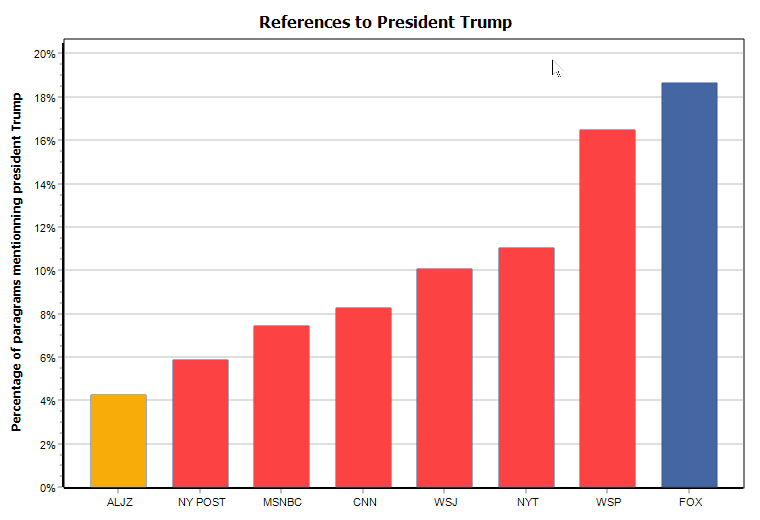 Obviously, this story will continue to unfold and so will the media framing of it. We intend to follow it in the weeks to come and post additional Blogs on our findings.