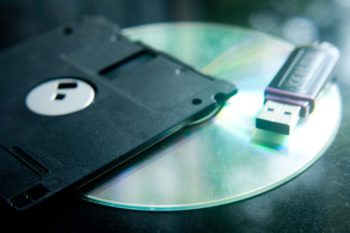 I can’t take any more photos, there is no space left on my smart phone! My Windows is running so slow, I must free up some space! I’m quite sure you have experienced these desperate situations. From the first days of the computer, infinite storage capacity was one of the goals. Needproof, Okay! ENIACwas the first electronic computer. It weighed more than 24,000 kilograms and took up about 167 square meters! Can you imagine how much data you could keep in it? Almost nothing!! ENIAC had no internal storage and punch cards were used to keep the data as external memory storage. And, it was not cheap at all! ENIAC cost the US government $400,000 in 1940s, hugeee right? Just multiply it by 14 to have an estimate in today’s dollars. 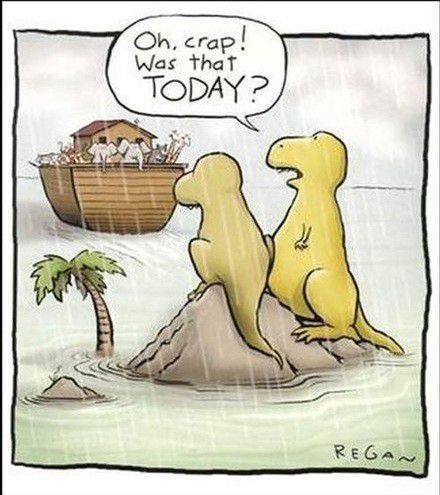 Punch cards were one of the most resistant-to-death creatures in the computer industry! We can trace them back to 1889 when no computer was out there and they were around up to the 1970s. Herman Hollerith built punch cards to reduce the pain for the US census calculation and data processing, a fascinating invention that was later used as an input device for computers. The next jump was in the early 70s when the 8” floppy disks were introduced. You may have seen those big flat pans! The initial capacity was around 100 kilobytes that was increased to about one megabyte in the late 1970s. In 80s, Sony introduced the 3.5” floppy disks that unlike their 8” ancestors had a protective hard-shell and a sliding metal cover! In terms of capacity, now we are talking about the maximum of 1.44 megabyte. These storage devices were quite famous for a while and you could see them in use up to ~2005. So, the message was clear! We were looking for more storage capacity in a much smaller device. You may agree that although the advance looks tiny these days, it was very significant at the time. Well, it is always better to look on the bright side, unless you are holding a laser pointing device! Talking about lasers, compact discs (CDs) used lasers to read and store the data. Initially, they could store 550 megabytes of data which was very impressive. But these guys were not very open to change and could only be written to once, that fact extendedthe life of 3.5” floppy disks. Re-writable CDs came to the market later.

The next development was made in 1995 when the Digital Versatile Discs (DVDs) were introduced. They can store from 4.7 to 17.08 gigabytes and we still see them around here and there. Okay, we are lucky to live in the digital era, witnessing the extraordinary progress. We can make a backup copy of our PC’s hard drive on a small USB flash drive and put it in our pocket. Fifty years ago it was science fiction! You can buy a 2 terabytes flash drive for ~$1,500. To have a better feeling, just imagine none of this happened and we were still stuck with punch cards. What if we want to store Google data on punch cards? Randall Munroe, an American cartoonist, answered  this question! He explains: 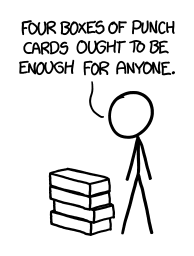 “Let’s assume Google has a storage capacity of 15 exabytes, or 15,000,000,000,000,000,000 bytes. A punch card can hold about 80 characters, and a box of cards holds 2,000 cards. 15 exabytes of punch cards would be enough to cover my home region, New England, to a depth of about 4.5 kilometers. That’s three times deeper than the ice sheets that covered the region during the last advance of the glaciers.”

An intriquing question is what will be the next development. Have any ideas?