There are several existing solutions to run QDA Miner, WordStat, and Simstat on an Intel-based Mac OS X computer. We have tested five different solutions, including Boot Camp, Parallels Desktop, VMWare Fusion, VirtualBox, and CrossOver. We present here a short overview of those solutions, as well as the result of a performance benchmark.

You can also run QDA Miner, WordStat and Simstat on newer M1-based Macs. However, the solutions are slightly different and are regularly being updated. For a detailed discussion of how to run Provalis Research software on Macs with the ARM chip please read the following blog: Running QDA Miner and WordStat on M1-Based Macs.

The fastest way to run our software is to use Mac OS Boot Camp (free with the installation of OS X). This utility will create a second disk partition on your existing startup disk on which you will be able to install a Microsoft Windows system. To switch to Windows, reboot the computer and select the Windows operating system. Since Windows runs on its own hard drive partition and does not share resources or hardware with a running Mac OS, this type of installation is the fastest and the most compatible (trouble-free) way to run Windows software on a Mac computer. It does, however, require a reboot of the computer to switch from one operating system to another.

Another way to run Windows applications on a Mac is to create a virtual computer that supports the execution of Microsoft Windows. We are aware of three products that can run Windows:

The main benefit of this method is the ability to run both Windows and Mac OS applications concurrently, without having to reboot the computer. All three products offer some form of interaction between software applications in both operating systems, such as the ability to easily cut and paste or share files. However, since both operating systems require large amounts of memory, a memory upgrade is often recommended, especially if one needs to process large amount of text data in WordStat. Another minor inconvenience of such a solution is the slightly slower performance of Windows applications. This is due to the virtual machine accessing the hardware indirectly. Speed penalties depend on the type of applications run. Our own tests on time-consuming tasks in WordStat suggest that the average performance in a VM environment varies between 82% and 86% of the speed one would get by running our applications under Boot Camp or on a dedicated Windows computer (see Figure 1). Analyzing a corpus of 10 million words with WordStat would take about 26 seconds running Boot Camp, but would range from 30 to 32 seconds when running a VM solution. Please note however that such a speed penalty may be negligible in everyday use of the software.

Many of our customers have chosen CrossOver (from www.codeweavers.com), or its open-source counterpart, Wine. The main benefit of such a solution is the ability to run Windows software on a Mac without installing Windows. Besides representing a cheaper alternative (one does not need to purchase a license for Microsoft Windows),  it allows the user to start Windows applications much more quickly since there is no need to reboot the computer or start a Windows session in a Virtual Machine. Such benefits come however at the cost of slower performance as well as potential minor compatibility issues. Our own speed tests suggest that memory and disk-intensive tasks may take up to twice as long to perform as they may take in Boot Camp, yet on typical smaller projects, Crossover can achieve performances near to that of the fastest installation. Again, on small projects, a difference in speed may be unnoticeable. One should also note that while QDA Miner and Simstat are able to run on a Mac with CrossOver, the most recent versions of WordStat (i.e. version 8 and 9), like many other many other Windows applications, cannot be run on CrossOver.

How fast are those solutions?

We tested the speed of WordStat 7 content analysis and text mining module using the five above-mentioned Mac OS installations. We ran WordStat from our qualitative data analysis software QDA Miner. Two datasets were used as benchmarks: a dataset of 916 documents, totaling 2.25 million words, as well as a second dataset of 174,222 short responses, totaling 3.35 million words. We performed three tasks on each data set:  1) a word frequency analysis; 2) a phrase extraction, and 3) a thematic content analysis using the Regressive Imagery Dictionary. Figure 1 presents the relative performance of those five solutions, compared to the fastest performance one could get while running Windows with Boot Camp. 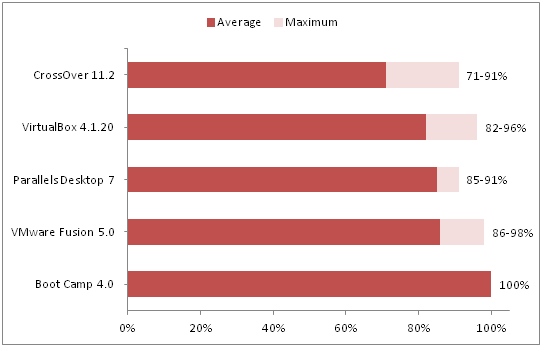 All tests were performed on a MacBook Pro with a 2.5ghz Intel i5 processor, 500 GB hard drive, and 4 GB of memory. Virtual Machine solutions were configured to use two processors and 1.5 GB of memory. Please note that these results are not necessarily representative of the general performance of these products when running other types of applications; they only reflect typical performances when running the most common time-consuming tasks in WordStat. Speed should not be the sole criterion in product selection since each VM solution differs in the way they integrate with Mac OS X and in how they support specific computer hardware.

What is the recommended configuration?

How to install Provalis Research software on a Mac computer?

If you’re using a solution that requires to install Windows on your Mac, you can just follow the regular installation process of Provalis Research software on a Windows machine. If you would like to run the software on your Mac computer using Crossover, you can read the following blog. Wine is another existing solution that allows you to run QDA Miner or SimStat on your mac without Windows. To learn how to install our software on a Mac using Wine, read the following blog.